(NEW YORK, NY) – California Metal titans IMPENDING DOOM have announced THE CHAOS REBORN TOUR running this winter in continuous support of their hard hitting record, Baptized In Filth.  Support will come from THICK AS BLOOD, FIT FOR A KING, THE BROWNING, HEARTS & HANDS and label mates THIS OR THE APOCALYPSE. 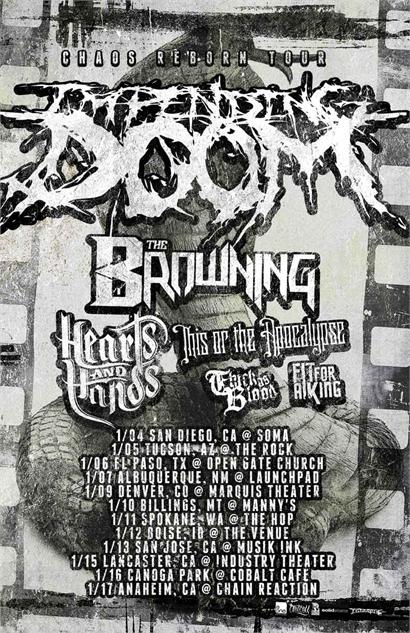 The band released their latest record Baptized in Filth earlier this year. Produced by Andreas Magnusson and Machine, this is the bands fourth full length and most ferocious effort to date.

“The apocalypse is nigh, and it has a soundtrack titled Baptized in Filth” – Outburn

“This is easily the best album that Impending has put out. It’s a flawless work of art”  – HM Magazine 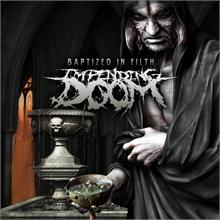 You can purchase/preview on iTunes HERE.

Charlotte, North Carolina occult rock band BLOODY HAMMERS will release its debut album Bloody Hammers on November 23 in Europe via Soulseller Records (February 3, 2013 in North America via Soulseller Records, distributed by RED). Described as “an addictive album with a retro edge that appeals to both the Nick Cave and Black Sabbath sides of the brain,” Bloody Hammers was recorded and produced by bassist / vocalist Anders Manga at NC’s Greystone Studios. Today, AOL Music‘s Noisecreep gives music fans the first taste of BLOODY HAMMERS‘ infectious power, premiering the album’s lead track “Witch of Endor“. Crank your speakers and hammer your mind out to “Witch of Endor” at this location.

The world of heavy music is quickly taking note of BLOODY HAMMERS‘ underground sound. Check out new interviews with the band via Revolver and Guitar World for more insight into this cult crew’s metallic mindset.

Named in homage to the singularly atomic Roky Erickson & The Aliens song of the same name, BLOODY HAMMERS play dark, hallucinatory heavy music that is as primitive and powerful as a dry stone wall and propelled by bassist Anders Manga, BLOODY HAMMERS‘ full length debut is an explosion of heavy sound and melodies that has been called “a psych / hard rock / horror fan’s dream come true” and is sure to find favor with music fans who can dig an array of dark sounds from Electric Wizard and Acid Bath to Alice Cooper and David Bowie to Joy Division and Bauhaus. The self-titled LP captures the band’s strong display of dooming riffs, dashboard-pounding grooves and vocals that segue from angry wail to soaring croon while warning listeners of impending doom. Headed to a black mass love-in? BLOODY HAMMERS‘ debut is for you. Pre-orders for the limited edition CD and LP versions of the album will begin on November 23 at this location.

“This album is a heavy and melodic collection of evil songs, and I could not be happier with the result,” says Manga. “Stylistically, I wanted to make a horror fueled hard rock album and this debut LP reflects that very sentiment and much more.”

After a two year writing period, WOLVSERPENT first recorded the PERIGAEA 2012 demo (pronounced “pear-a-guy-a”) in Dec ’11-January 2012. Choosing initially not to release it but to hold onto it for another 9 months and re-write it.

They are now offering the demo as a free stream at Bandcamp and download via their official site here. The upcoming full-length version of PERIGAEA will be an entirely different manifestation of the ideas heard on the demo.

WOLVSERPENT commented on the recent signing and new material:

“We are very pleased to be working with Relapse Records on this upcoming album. We are excited to join forces and foster the potential of our best work to date.

We don’t want to say much about the concept now. But we will say this: PERIGAEA is inspired by the four stages of existence and with that, the phases of humanity within the Earth and the greater Universe. PERIGAEA explores and reinforces our qualities and struggles as humans in this life. Our relationship with the Earth and our place as spiritual beings in what some believe is the final phase of this cycle. There are many names for it, one of those names is ‘Kali Yuga,’ the age of Kali, the dark age. The serpent that eats it’s own tail will once again devour itself and give to itself a new birth and a fresh start. This demo represents the early stages and younger concepts of PERIGAEA. We decided to set new standards for ourselves, working longer and investing more in our music, allowing the pieces to breathe and gain new life. Created from the strength and seeds of ideas past, this demo has served as the roots from which we have grown.  We want to share this process of growth with our fans. We have taken Wolvserpent’s concepts to the stone and sharpened our vision.”

Updated WOLVSERPENT news and information is available via the band’s official site and Facebook page.