(Ottawa, Ontario) Deathcore thrashers Chariots of The Gods are proud to announce the official release of their full length album Tides of War on Tuesday, January 29, 2013, which is now available for pre-order on the band’s Bandcamp here along with the first single streaming at the following location here.

“We can’t begin to describe how proud we are to finally share our musical creations with the world. So much has gone into it and we were lucky enough to work with incredible people such as our producer Glen Robinson and Aleksi Sihvonen (Norther). Our sweat and manly tears gave this full length album a more authentic and mature sound that will hopefully, rip your face off and leave you breathless” comments vocalist Renaud Jobin.

Produced by award winning producer/engineer/mixer Glen Robinson who has worked with names such as The Ramones, AC/DC, Gwar, Annihilator and  Voivod, COTG‘s new album delivers 14 epic, crushing tracks to follow up their well received 2010 debut EP Reverence, which the band aggressively toured in Quebec and Ontario, sharing the stage with names such as Misfits, Voivod, Despised Icon, Kataklysm, Blind Witness, Misery Index, Martyr, Fuck the Facts, Blackguard, Neuraxis, The Agonist, Reanimator and Insurrection.

For more info on Chariots of The Gods please follow them at these links:

On the heels of the fall release of their acclaimed comeback release Wheels of Impermanence, Canadian progressive metallists HEAVEN’S CRY will reissue their first two albums, Food For Thought Substitute and Primal Power Addiction, on January 8, 2013.

The albums – which are now available for pre-order separately or as a specially-priced bundle – along with revamped artwork, have been newly remixed by Yannick St-Amand (Despised Icon, Beneath The Massacre, Kataklysm) and remastered by Jens Bogren (Opeth, Katatonia, Symphony X).

“I’m having a blast listening to our music the way we imagined it back then,” says vocalist/guitarist Pierre St-Jean

“Our music has multiple layers where guitars and bass play different parts to create textures, and since our music is less riff-oriented than what most rock and metal bands do, it’s important to hear every detail, every instrument clearly. That is now possible, thanks to Yannick and Jens.”

“I’m so grateful that Prosthetic Records agreed to re-release our first two albums. We worked very hard writing those tunes but unfortunately, we did not have the resources at the time to make it sound the way we wanted it to. Having the opportunity to revisit these albums and give them a new polish, it finally feels like justice has been done to these songs. You know, in the making of a progressive album, every detail is important. Our goal has always been to make sure that the music and the lyrical content are coherent, and that every instrument plays its role in the process. Now that they have been remixed properly, you can hear the music we wrote in its entirety.”

HEAVEN’S CRY formed in the early ’90s in Montreal. Before long, founding members St-Jean and Sylvain Auclair (vocals, bass) signed with Canadian label Hypnotic Records and recorded their debut album Food For Thought Substitute in 1996. The album was simultaneously released in Japan and was awarded the #13 spot for “Metal Albums of 1996” in Burrn! Magazine. Subsequently, the band’s buzz spread throughout Europe and earned the band several “album of the month” features in many acclaimed magazines.

René Lacharité (drums) and Eric Jarrin (guitar, ex-Despised Icon) joined the band prior to the release of their second record, Primal Power Addiction, in 2002 on Dutch label DVS Records. The groundbreaking, critically acclaimed release was well received and earned the band a spot on the prestigious ProgPower Festival in the Netherlands, as well as a European tour supporting Threshold. HEAVEN’S CRY supported the album’s North American release by performing alongside the likes of Anvil, Planet X, Arena, and Nightwish in 2004.

After taking a seven-year hiatus, the band recently released their third album, Wheels Of Impermanence, which Blistering.com labeled as “power metal majesty.”

For more information on the band, please visit: http://www.heavenscry.com/

The man, the myth, the legend; arguably the greatest metal drummer of all time, GENE HOGLAN will be our guest on The Welding Room tonight. 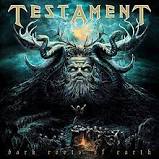 After reissuing three acclaimed recent studio albums by legendary hard rock/heavy metal guitarist MARTY FRIEDMAN over the summer, Prosthetic Records is excited to now introduce North American audiences to the former Megadeth and Cacophony guitarist’s two Tokyo Jukebox albums. Released in Japan in 2009 and 2011, respectively, Tokyo Jukebox Vols. 1 & 2 – the 9th and 11th chapters in FRIEDMAN’s influential solo discography – were released in the U.S. for the first time as a limited-edition, specially-priced 2CD set featuring artwork exclusive to this pressing and new liner notes by FRIEDMAN himself.

Soon after leaving MEGADETH following a 10-year run in which the iconic band sold some 10 million albums worldwide, FRIEDMAN – perhaps the most revered lead guitarist in thrash metal history – moved to Japan, where over the past decade he became a household name. Between his solo releases and collaborations with Japanese stars, he has played on and written numerous Top 10 hits (including two #1’s); he has also made hundreds of appearances on mainstream Japanese television and performed at legendary venues such as Budokan and the Tokyo Dome.

Tokyo Jukebox Vols. 1 & 2 feature energetic instrumental covers of Japanese pop (J-pop) songs that can be enjoyed by anyone with a sweet tooth for melody, and capture FRIEDMAN’s passion for the music of his adopted home country – although, as he warns in the liner notes for this release;

In the video above (also posted at Prosthetic’s newly-launched FRIEDMAN mini-site, where additional Tokyo Jukebox – related videos will be unveiled in the coming weeks), FRIEDMAN further describes the collection, calling it some of the heaviest and best work of his career:

FRIEDMAN recently completed a European tour. He hopes to make an overdue return to North America in 2013.

The title track has already reached #2 on the Beatport Dubstep Chart and the group is now making their Metal-infused-Dubstep song Bass Driven Thing available as a free download.

A Michigan-born Los Angeles transplant, Talon cut his teeth in the music capital of the world with the modern metal band Killingbird, which he founded, and in 2005 joined Scum Of The Earth, featuring former ROB ZOMBIE axeman Riggs.

Inspired by the revolutionary new sounds in Dubstep and Glitch music generated by the likes of fellow metal-head-turned-DJ SKRILLEX, Talon began the BLACKBURNER project, remixing tracks and releasing original compositions through the Cleopatra imprint Hypnotic Records. The project immediately met with enormous success as compilations featuring BLACKBURNER climbed the iTunes Electronic charts and BLACKBURNER tracks racked up over 15,000 downloads. Bolstered by the overwhelming on-line buzz, preparations were made for a full-length album – and now the time has come for BLACKBURNER to make its worldwide launch.

Influenced by Talon’s background as a metal guitarist/vocalist, BLACKBURNER combines the heavily twisted and seriously aggressive Bass beats of Dubstep and Glitch with the melodic hooks of Rock, Industrial and Electronica to create daring yet widely appealing new hybrid sound.

Allston, Massachusettes progressive metal unit, Caricature, teamed up with Heavy Blog is Heavy to unleash a brand new track entitled Saviors II, from their forthcoming debut full length album, The Sound of One Man’s World Collapsing. Head on over and check out Saviors II at this location.

Caricature mastermind, Joseph Spiller, had the following to say about the meaning behind the song and how it differs a little bit from the rest of the album:

“Juxtaposed with the other songs on the record which are introverted and autobiographical, Saviors II is about a former friend. The person used to be one of the most stand up, hard-working people you could ever meet. Amazingly talented, but somewhere along the way this individual chose drugs and an intense obsession with a certain psychedelic drug addled writer over life, career, family and friends. Deep in it all to the point where they did nothing else other than sit around their parents house, spent their money, didn’t work and then somehow turned a nose up to the rest of the world and believed to be on a “higher moral plane” than everyone else. Saviors II is a song about someone being a disappointment, not so much to others, but to themselves.“

Caricature recently wrapped up the recording process for The Sound of One Man’s World Collapsing at Universal Noise Storage in Newburyport, MA with Greg Macklin (Ordinance/Jeff Loomis) and Brett Boland handling mixing duties. The album also features a guest solo from Greg. A release date has not been set.

Dallas based hard rock outfit Brand New Machine signed with Epochal Artist Records/EMI for the release of their upcoming debut album for release in March 2013.

They hit the road last week as direct support to Guns N’ Roses on a string of tour dates across Indonesia.

“It is a dream come true for us especially getting a chance to play with an iconic band like Guns N’ Roses. Brand New Machine and Guns N’ Roses is a match made in heaven for us,” commented vocalist Brantly Thompson.

“We can’t wait to experience these countries and give them a shot of our culture right in the arm. Brand New Machine is ready to bring a sleazy rock show to Asia. This is going to be one giant party and we can’t wait.”

Brand New Machine is currently riding high off the success of their current single Girls Like You, which began to heat up local radio request lines around Dallas earlier this year. Brand New Machine’s brand of hard rock takes the band’s hard-living lifestyle and mixes it with arena ready rock anthems to create a soundtrack for debauchery. Brand New Machine’s explosive live show had label’s eager to sign the band and has earned them countless opening slots for national acts.

The track is the lead single from Moonshine Bandits new album, Whiskey & Women: Deluxe Shiner Edition, which is available in stores now. The album is a 2-disc CD/DVD set featuring brand new songs, as well as an exclusive DVD of all the group’s music videos.

The Whiskey & Women: Deluxe Shiner Edition 2-disc CD/DVD set was designed as a thank you to the Moonshine Bandits loyal “Shiner” fan base. The album is packed with 16 tracks and five new songs including tracks with Colt Ford, Danny Boone from REHAB, the Kottonmouth Kings and hick-hop heavyweight Big Smo. In addition to the new songs, the exclusive DVD contains the music videos for Get Loose, For The Outlawz featuring country superstar Colt Ford, My Kind of Country, Super Goggles, Shine With Me, and the brand new video for Dive Bar Beauty Queen.