Do we really have to worry? Is our civilization standing right on the edge of the abyss? Is the Maya calendar actually right, predicting the end of the world on December 21, 2012?

New age circles are convinced that the apocalyptic prophecy can be derived from the Mesoamerican civilization’s calendar.

“We will all survive the year 2012 and face an even more positive and energetic future.”

Helloween have documented how this future could look like, or rather sound like, on their latest studio album Straight Out Of Hell, scheduled right after the alleged doomsday on January 22, 2013. It’s a work full of speed and toughness, with optimism and great joy of playing, featuring complex arrangements, strong hooks and plenty of catchy melodies.

Or, to let the facts speak for themself: 13 mostly fast-paced songs that turn out to be impressively multi-layered and will completely delight all Helloween fans, due to the different songwriters Andi Deris, founding members Michael Weikath and Markus Großkopf, and guitarist Sascha Gerstner. 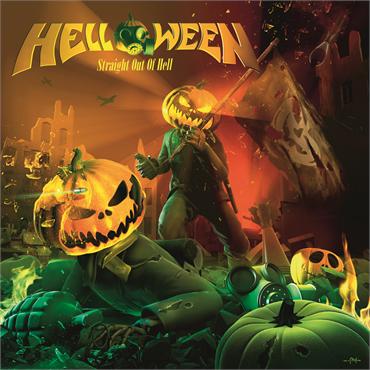 “Straight Out Of Hell is the consequent development of the two albums before. 7 Sinners was recorded more or less in the wake of Gambling With The Devil, while the new songs are a continuation of the 7 Sinners directives, only a little less doom bound and noticeably more positive. These songs will kick even the laziest listener’s ass.”

Helloween’s guitarist is referring to tracks such as Make Fire Catch The Fly, Far From the Stars, Church Breaks Down, the title track (written by bass player Markus Großkopf), and the straightforward Years – all of them racing through the terrain at full speed. In addition, there is the complex and passionate Burning Sun by Michael Weikath, which Deris refers to short and sweet as “one of Weik’s highspeed masterpieces” (the limited edition will feature a special Hammond version in memory of Deep Purple’s recently deceased organ player Jon Lord). World Of War by Sascha Gerstner convinces with thrashy guitar riffs, demonstrating Helloween’s impressive virtuosity.

“What’s so special about this band, is the fact that we were always allowed to do anything we wanted, or – even if we allegedly weren’t – did it anyway. Even the at the time slightly tabooed The Dark Ride initially earned us negative reviews, but ended up with multiple Gold Awards. That’s the kind of freedom you feel on Straight Out Of Hell as well – we didn’t let anybody or anything put pressure on us.”

But Helloween wouldn’t be Helloween if Straight Out Of Hell would not feature the band’s other, slightly more groovy side as well.

Deris has – in his own words – contributed Waiting For The Thunder,

“a rock song reminding of the old Pink Cream 69 tunes”

Gerstner lets off steam on Asshole and complements the album with Hold Me In Your Arms, a wonderful ballad, providing the desired antithesis to the otherwise extremely energetic record. Speaking of energy: the determination that has always been an integral part of the Helloween camp was captured perfectly by their producer Charlie Bauerfeind at the band’s own MiSueno studio in Tenerife. Bauerfeind consciously created a raw sound, keeping the edge of Helloween’s new songs and working without computer-controlled devices.

“Thanks to Dani, the whole album breathes pure authenticity, which distinguishes Straight Out Of Hell from lots of other artists’ productions. In addition, the new album sounds more compact and homogeneous than 7 Sinners has, and is one of the fastest releases in Helloween’s history.”

Also, there are significant differences in a number of topics Helloween tackle on Straight Out Of Hell. The best example of the ability to think outside the box of pure metal cliché is their first single release Nabataea, which Helloween’s singer wrote during a holiday. The song is about the legendary kingdom, located in today’s Middle Eastern region, where the first real democracy existed over 3000 years ago. The secret Nabataean city Petra, hidden behind a cliff scenery and only discovered at the beginning of the 20th century, is the origin of many myths and legends.

“We took the liberty to tell this exciting culture’s whole story, although the song therefore lasts more than seven minutes. Truth be told, if there had been more to tell, the track would have been even longer.” 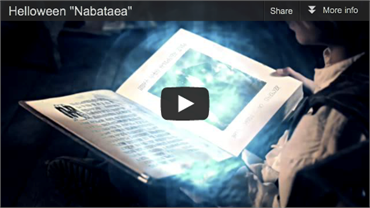