“We have been looking forward to this for so long! For us, this album represents our dedication to our fans. They have shown the utmost loyalty and patience, so we hope that our efforts have an opportunity to shine with this release. Our journey through these songs has spurred a creative evolution of Edge of Attack, and with that we hope our self-titled LP will mark our place in the metal community.”

For more info on Edge of Attack please follow the band at these links:

No good could possibly come out of the frigid Northern lands of Alberta, you say? Well, sorry to tell you, there’s an exception to every rule. Enter smoldering power-thrash five-piece Edge of Attack.

Combining haunting vocals, shredding guitars, complex bass lines, furious drumming and choral and symphonic arrangements with surprising depth, Edge of Attack has not only taken the metal scene by storm, but also by surprise. Having been featured in Revolver magazine, you’d think the band has surely been around for years, but truth be told, they’ve accomplished all this while releasing no more than two singles.

Representing the changes that have taken place and the reinvention of Edge of Attack’s sound, the self-titled album, which was produced by guitarist/vocalist Jurekk Whipple himself and is soon to be released with Spread the Metal Records, is, simply put, a reawakening and rebirthing of power metal with thrash creeping its way into the picture.

Progressive instrumentalists SCALE THE SUMMIT revealed a new video update about the writing process for their upcoming spring 2013 release, The Migration.

The band also confirmed they will begin recording the album at Basement Studios in Winston-Salem, NC with Jamie King (BTBAM, He Is Legend, For Today) on January 2. More information will be announced shortly.

SCALE THE SUMMIT’s critically acclaimed 2011 release The Collective was labeled by Hails and Horns as ” a perfect example of the pinnacle of musical excellence.”

The album’s extensive touring cycle saw the band complete several successful headlining runs in addition to support tours with the likes of Periphery, Protest the Hero, Cynic, The Contortionist, The Human Abstract and Fair To Midland.

You can stay up-to-date on the band and their upcoming album by checking their website:
www.scalethesummit.com
youtube.com/scalethesummit 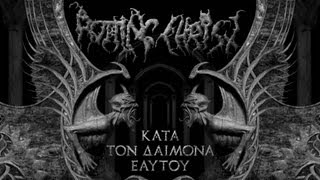 ΚΑΤΑ ΤΟΝ ΔΑΙΜΟΝΑ ΕΑΥΤΟΥ (Do What Thou Wilt) proves to be ROTTING CHRIST’s darkest output to date, and links the band to their heritage as pioneers of black metal. From underground heroes to international headliner status, the Greek band brings together elements from death, heavy and gothic metal with a rich native element that never betrays their dark roots. The album takes this  progression even further as ROTTING CHRIST forge their own sound, and augment it with female vocals, and a wide array of instrumentation. Their long years of composing and experience show unwavering confidence and maturity.

Regarding the new album, ROTTING CHRIST frontman Sakis Tolis recently revealed in an interview with Kaaoszine

“It is an album that I have been working on for more than a year. It was recorded in Athens and mixed in Sweden with Jens Bogren (AMON AMARTH, OPETH, KATATONIA). I came up with our darkest outcome ever. It’s an interesting album, very apocryphal. Its a multinational album; it is about underworld Gods inspired by different ancient cultures.”

ΚΑΤΑ ΤΟΝ ΔΑΙΜΟΝΑ ΕΑΥΤΟΥ (Do What Thou Wilt) is set for a North American release on March 5, as a CD, double gate-fold LP, and a limited edition Digibox including a pendant in a velvet bag, a flag, and a Digipak CD with the bonus track Welcome to Hel.

NEUROSIS will release their critically acclaimed, tenth studio album, Honor Found In Decay on February 5 in North America, February 8 in Germany/Benelux/Finland and February 11 in the UK/World via Relapse Records/Neurot Recordings.

This deluxe 2xLP edition comes packaged in a gorgeous Stoughton tip-on gatefold jacket and is accompanied with a stunning 16 page LP sized booklet. The audio was cut directly from the original studio master tapes and pressed on 180 gram weight vinyl in five color options. Pre-orders and pressing information are currently available via Relapse at this location.

NEW ALBUM: Ecstatic Trance out now via Season of Mist.

A LIFE ONCE LOST was formed in ’99 in the Philadelphia suburbs by Doug Sabolick (guitars) and Bob Meadows (vocals). The nascent band immediately forged a noisy, high-impact wall of sound combining dissonant, modern aggression with the hallmarks of traditional metal.

A LIFE ONCE LOST has existed on the forward edge of modern metal, where progression and innovation collide with tradition, since its inception. From day one, the path the ALOL have blazed has not only been defiant but also their own.

Three years in the making, A LIFE ONCE LOST’s new album Ecstatic Trance is the product of that unwavering determination and raises their patented rhythmic attack to hypnotic new levels of precision and expression. Huge, jagged riffs and churning, syncopated rhythms are the blueprint for the emotive guitar-playing and explosive vocals of Sabolick and Meadows respectively.

To learn more about A LIFE ONCE LOST visit:

(Ottawa, ON) Melodic death thrashers Chariots of The Gods posted a video teaser for their upcoming music video for the title track from their full length album Tides of War being released on Tuesday, January 29, 2013.

In additional news, COTG are offering fans a FREE DOWNLOAD of the title track at the following location here along with pre-order of the album on the band’s Bandcamp here.

Produced by award winning producer/engineer/mixer Glen Robinson who has worked with names such as The Ramones, AC/DC, Gwar, Annihilator and  Voivod, COTG’s new album delivers 14 epic, crushing tracks to follow up their well received 2010 debut EP Reverence, which the band aggressively toured in Quebec and Ontario, sharing the stage with names such as Misfits, Voivod, Despised Icon, Kataklysm, Blind Witness, Misery Index, Martyr, Fuck the Facts, Blackguard, Neuraxis, The Agonist, Reanimator and Insurrection.

For more info on Chariots of The Gods at these links:

Inspired by the revolutionary new sounds in Dubstep and Glitch music generated by the likes of fellow metal-head-turned-DJ SKRILLEX, Talon began the BLACKBURNER project, remixing tracks and releasing original compositions through the Cleopatra imprint Hypnotic Records. The project immediately met with enormous success as compilations featuring BLACKBURNER climbed the iTunes Electronic charts and BLACKBURNER tracks racked up over 15,000 downloads. Bolstered by the overwhelming on-line buzz, preparations were made for a full-length album – and now the time has come for BLACKBURNER to make its worldwide launch. Influenced by Talon’s background as a metal guitarist/vocalist, BLACKBURNER combines the heavily twisted and seriously aggressive Bass beats of Dubstep and Glitch with the melodic hooks of Rock, Industrial and Electronica to create daring yet widely appealing new hybrid sound.