The originators of humorcore, Psychostick are proud to share with fans their latest creation Dogs Like Socks inspired by the band’s moral support, the Siberian husky duo of Elphie and Mishka.

“This song answers the question, ‘can you make something cute brutal?’ We just did this for fun. We have a recording studio, we had inspiration, so why not? Those dogs are the best. This is our tribute to them.” comments guitarist Josh “The J” Key.

After completing their Santa’s An Asshole Tour this past November/ December, Psychostick are now gearing up for their next tour in March with dates soon to be announced in support of their latest release Space Vampires VS Zombie Dinosaurs in 3-D, which is now 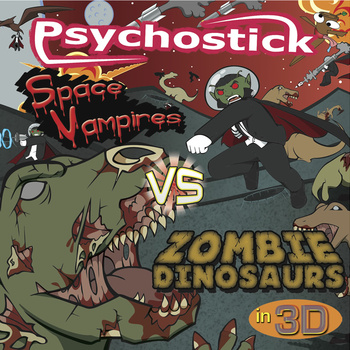 Most high school friends can’t even stand to look at each other once school’s out, but in the case of vocalist Rob “Rawrb” Kersey and guitarist Josh “The J” Key, they decided to spend even more time together after graduation.

Harnessing their crazy sense of humor and love of all things metal, they joined forces with drummer Alex “Shmalex” Dontre and bassist  Matty J “Moose” to create Pyschostick, a band they’ve coined as humorcore. With hilarious lyrics, heavy riffs, notorious stage antics and high-energy performances, the band has caused millions of laughs around the world and hundreds of mosh pits across the US, often simultaneously, since its birth in Phoenix, AZ in 2000.

Almost 100 percent do-it-yourself, Psychostick never strays from its signature sound, a combination of heavy music Chimaira, Machine Head and Hatebreed would be proud of and wit and humor that would make Tenacious D and Weird Al Yankovic holler with laughter.

With two full-length albums behind them – We Couldn’t Think of a Title and Sandwich – the band released their latest record, Space Vampires VS Zombie Dinosaurs in 3D in 2011, following it up with a tour with Mushroomhead to add to their total count of 21 nationwide tours that have hit 47 states.