“The whole is greater than the sum of its parts” – Aristotle

The pedigree of Pushmen’s parts are impressive to begin with. This in turn makes the ‘whole’ a brutalizing result with years of experience, style and attitude to back it up. Aptly named after the Japanese subway workers who physically stuff human beings into crowded Tokyo commuter trains, Pushmen do the same to your sensibilities. The punishing brand of metal they force upon their audience can often leave the uninitiated confused and claustrophobic but pregnant with the sense they are headed in the right direction. 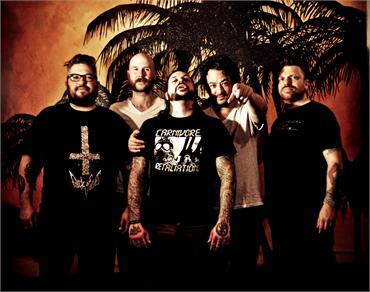 After releases on Relapse Records and Robotic Empire, Employer called it quits in early 2003. The 3 spent the next 8 years in Austin’s musical wild frightening locals in numerous heavy incarnations.

“I feel the time I’ve spent playing, writing and recording over the past 10 years has been in preparation for Pushmen” says guitarist Cortez (Also of Ratking and Sea of 1000)

“this is the music I am supposed to make.”

In late 2011 joined by NYC noise immigrant ‘Cooper’ on bass it became clear what direction the band should take… HEAVY!

“Now that the idea of metal and punk can be so many different things, I refuse to pick one” says Cooper (also from Made Out Of Babies/Bad Powers/Players Club).

It shows: Pushmen are a big bang of influences. They seem to possess the math of contemporaries like Keelhaul with the groove of Rwake, and the dexterity and intelligence of Mastodon with the guttural cries of Early Rollins Band. Riffs that can make you feel uneasy and safe at the same time like Helmet.

The last piece of the puzzle came in the form of guitarist Mark Nathan.

“The texture of his leads and the smoothness of his personal style was exactly what we needed to set ourselves apart” says singer Moore (also of Ratking and Sea of 1000).

If Pushmen are truly the big bang, then Mark (also lead guitarist of Heartless Bastards) brings the order from chaos to its universe.

The Sun Will Rise Soon on the False and the Fair is the debut release from Pushmen, out April 2013 on The End Records. Its 9 blistering tracks will not release you until you beg it to. It is an opus born from the years of experience that seems to have finally come together for these five metal journeymen. Its sheer weight coupled with swirling guitars is perfectly complimented with an agonized vocal timber that is just plain haunting. The opening vocals of Amass have been compared to a locked out lover screaming from a projects empty courtyard. As desperate as he sounds he is never let back inside. 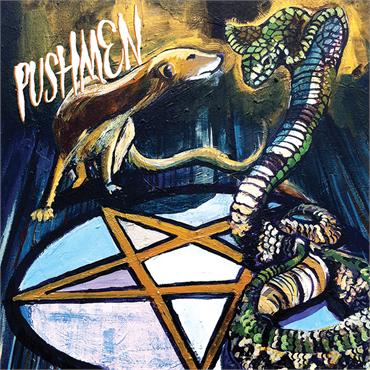 Upon repeated listening, this debut gives you the sneaking suspicion that Pushmen have a hidden agenda. Something far more sinister might be at play between the notes. When asked to comment about this feeling of uneasiness drummer Kevin Fender (also­ ex-member of The Sword) had only this to say.

“The Pushmen goal is to find the right combination of notes, beats and rhythms that will in effect create a wormhole large enough for the listener to travel back in time and punch himself in the face for all the years they are about to waste listening to shitty music. Because in our reality that time has gone.”