Los Angeles, CA – First breathing life in 2006, OCEANO first emerged onto the extreme metal scene via the Chicago underground. The band quickly established an intense work ethic and set their sights on being one of the loudest, angriest and most intense bands around. After a few member changes and some slight adjustments to their sound, OCEANO are now set to release their third album, INCISIONS on October 1, 2013.

For OCEANO, Incisions is essentially the first of their albums to be approached lyrically on an emotional and personal level. Its purpose lyrically and musically is to expel the stress and inner demons of their time between albums.

“We invested a lot of time and effort in the writing, production, and recording of Incisions. This is our most focused work to date and we are proud and excited to share it with the world” – Oceano comments

FACT and Alternative Press Magazine are exclusively bringing you the new live performance music video for Tonight. The track is a great starter song for new fans, as Tonight is essentially the essence of the band condensed into just over a minute. The band expertly displays their effortless ability to mix blast beat-laden metalcore and pop-punk influenced harmonies—a skill that is evident throughout FACT’s new album Burundanga, which drops on its new release date of June 4, 2013 via Good Fight Music. Take a look at the new video for Tonight at this location.

“The video was shot when we did a (sold out) headline show at a venue called The Pipeline in London in March this year after our UK tour with Your Demise. It was rad.”

“The track Tonight was recorded in Florida with Elvis Baskette (as was the rest of the album), and it’s probably one of my favourite songs on the record. Lyrically, Tonight is a song about realising the moment you’re in and seizing the opportunities that that moment presents. Not wanting to sound pretentious or anything, but it’s about that moment of epiphany when you realise that you’re the one who controls your own destiny. It’s a positive message – it’s about takings control and taking responsibility. It fits into the lyrical theme of the album as a whole because a lot of Burundanga is about being able to take the positives out of loss and regret – everyone has dark stuff happen to them, but it’s all about being able to pick out the specks of light in those dark times, and Tonight is all about doing that right now.”

FACT has another video up for viewing, this time for the track Pink Rolex, exclusively available on their Facebook page. Check it out at this location.

Burundanga is a digital-only release and will be available from iTunes, Amazon and all your favorite digital music retailers.

With the band’s last two records charting in the Top 10 in their native Japan, the band has continued to enhance their burgeoning reputation with intensive touring both on home turf and across the United States and Europe – touring which has seen them play on the main stage at festivals such as Sonisphere (UK) and Summer Sonic (Japan) as well as forge a hardcore following with a series of club tours alongside established international touring acts Your Demise, Iwrestledabearonce, Senses Fail and Memphis May Fire amongst many others. At the present, FACT has sold roughly 260,000 albums worldwide.

After bursting into the consciousness of fans of heavy music both nationally and internationally with the release of 2009’s self-titled major label debut, FACT has gone on to become one of Japan’s biggest and best-loved rock bands of the decade.

For more info about FACT, please visit these websites:

WHITECHAPEL’s debut full-length album, The Somatic Defilement, is the album that firmly planted the band on an upward trajectory and carried them to the upper echelons of modern death metal. The band has taken The Somatic Defilement and placed it in the capable hands of Audiohammer Studios producer Mark Lewis for a complete re-mix and re-master. The results are staggering and give The Somatic Defilementa modern luster up to the standards of the band’s most recent recordings. Fans can listen and pre-order now at metalblade.com/whitechapel. The album will be released April 12/15.

The Somatic Defilement, originally released in 2007, is a concept album about Jack the Ripper‘s infamous murders of prostitutes in East London‘s WHITECHAPEL district. This 2013 re-release sees the band tasking producer Mark Lewis to painstakingly bring the six year old recording to today’s standard.

Whitechapel was one of the most well received albums of 2012, with critical acclaim from some of the most respected music outlets including The New York Times, Alternative Press, Metal Hammer. The album also claimed bragging rights as the iTunes UK Metal Album of the Year for 2012!

WHITECHAPEL’s video for their song I, Dementia can be viewed HERE. The video was shot by David Brodsky of MyGoodEye as part of the Scion AV Project.

“Open Eyes is a song about the real world vs. the perceived world. This video shows the dangers of living in the latter of the two,” says vocalist Brandon Roundtree. 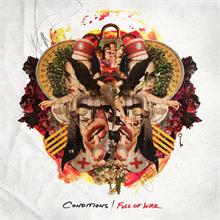 CONDITIONS will release their newest full length Full Of War on March 26, 2013.

“If you haven’t grasped this yet, Full Of War is a fantastic album that should be the envy of My Chemical Romance, Paramore and Taking Back Sunday. It is the first truly essential listening of the year” – Outburn Magazine

Producers Brandon Paddock and Taylor Larsen (PERIPHERY), who’ve done various production and engineering work with THE USED, PAPA ROACH and BLACK VEIL BRIDES, among others have helped CONDITIONS craft an album that is leaps and bounds beyond their already impressive debut, Fluorescent Youth.

“We wholeheartedly believed in our last record,” insists Roundtree.

“But then after we lived with it, we realized it was maybe a little ‘safe’ for us. We took that very much to heart and decided to showcase the fact that we are not a play-it-safe band.” 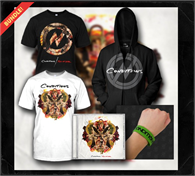 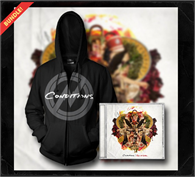 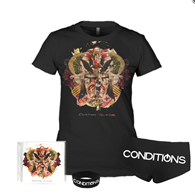 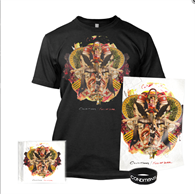 (Allston, MA) – Groove heavy prog metallers, Caricature, recently held the worldwide premiere of their music video, A Long Term Illness. Check out the video here and get the run down on the filming from Caricature mainman, Joseph Spiller. The track is taken from their forthcoming debut album, The Sound of One Man’s World Collapsing. The band is currently in the process of securing a label home to release the album a bit later this year.

Caricature are featured in the March 2013 issue of Alternative Press Magazine (#296) in the AP&R section, and recently made the list of ‘Most Anticipated albums of 2013’ at Heavy Blog is Heavy. The band also premiered the track Saviors II from their upcoming album.

“If that single is any indication of how well the album will pair heavy and catchy, then I think we’ve got a shoe-in for one of the best albums of the year already” – Heavy Blog is Heavy

Another single from the forthcoming album, entitled Monuments, is streaming now via the band’s Official Soundcloud.

If you’re not familiar with Caricature yet, it’s only a matter of time. Be sure to keep an eye out, as the band have plans to hit the road and travel all over the U.S. starting this spring continuing throughout 2013.

(Allston, MA) Groove heavy prog metallers, Caricature, released a video teaser clip for the song A Long Term Illness from their forthcoming debut album, The Sound of One Man’s World Collapsing. Check the teaser clip here in anticipation of the full music video, which will be premiering March 1.

The band is also featured in the March 2013 issue of Alternative Press Magazine (#296) in the AP&R section.

If you’re not familiar with Caricature yet, it’s only a matter of time. Be sure to keep an eye out, as the band have plans to hit the road and travel all over the U.S. starting this Spring and continuing on throughout 2013.

The three-track, 40-minute Widowmaker, the critically acclaimed new album by UK-based extreme metal act DRAGGED INTO SUNLIGHT, is now available for purchase. You can pick up a copy of the album on CD from the PROSTHETIC webstore HERE or digitally through Amazon MP3 or iTunes. Widowmaker is also available for pre-order on 12″ vinyl format in white, 180-gram black or clear vinyl with green splatter. The release of the LP, originally set for November 13, has been pushed back to December 18 due to manufacturing delays, but pre-orders are still expected to begin shipping in late November.

Hailed as a “crushing musical experience easily among the year’s best extreme-metal records” by Revolver, Widowmaker was named “album of the month” in the new issue of Terrorizer. The album also garnered 4/5 ratings from Alternative Press — who claimed “music doesn’t get much more devastating than this” — as well MSN Entertainment (who also awarded it “Album of the Week”). The members of DRAGGED INTO SUNLIGHT — whose identities remain hidden by masks, and who perform live with their backs to audiences in near total darkness — have claimed that the concept behind Widowmaker is “everything heavier and everything louder than everything else,” and that the album will “leave the listener thinking whether jumping out of a 4th floor window might actually be the best idea they’ve ever had.” It marks the group’s first release since 2010’s Hatred For Mankind, which Prosthetic reissued worldwide in 2011.