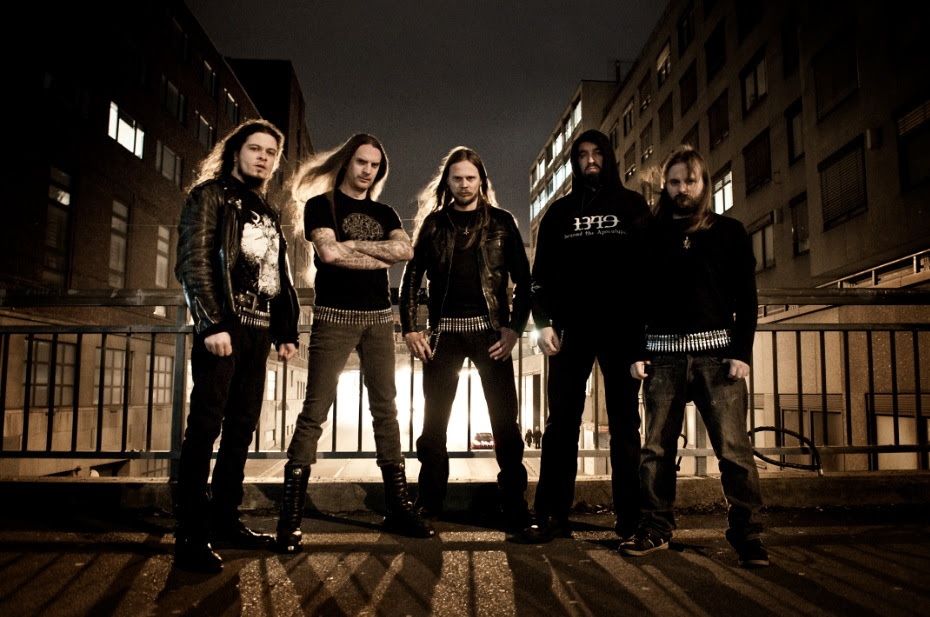 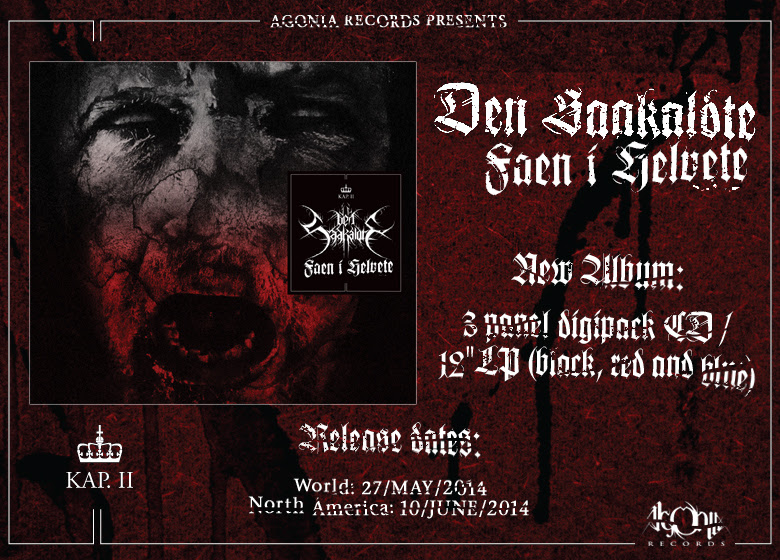 Horror Pain Gore Death Productions has released the second album from Massachusetts black/death beasts Soul Remnants and entitled “Black And Blood” on CD and Digital formats. Below is the official description:

Order your copy of the CD for only $10 with free shipping at http://www.horrorpaingoredeath.com/store/hpgd073.html
Listen to the entire album for free then purchase the Digital Download for only $6.66 at http://hpgd.bandcamp.com/album/black-and-blood

French black metallers with a heavy southern rock touch, GLORIOR BELLI, reveal the title song from their forthcoming album “Gators Rumble, Chaos Unfurls”. The third song to be released prior to street date is available for listening at Noisey, below. “Gators Rumble, Chaos Unfurls” will hit the shops on October 29 in Europe and November 12 in North America via Agonia Records.

Consequently climbing the ladder of innovation and artistic development, the French band GLORIOR BELLI managed to work out a very own sound and view in the often stiff frames found within the black metal genre. Descriptions such as “Avant-garde black metal bluesmen” (Pitchfork) or “bluesy doom-sludge” (Metal Sucks) are only the two sides of the same coin, that is about to reveal a new flip. “Gators Rumble, Chaos Unfurls” – band’s fifth full-length release – is yet another milestone of an unusual relationship between southern stylistics and crushing heaviness, all tied up and sealed by a twisted yet still refreshing take on music, straight from the suburbs of Paris.

The successor to “The Great Southern Darkness” (Metal Blade, 2011) will be available as digi-pack CD, 12″ Vinyl and digitally.

II. Wolves At My Door

V. From One Rebel To Another

VI. I Asked For Wine, He Gave Me Blood

VII. The South Will Always Know My Name

For more information and shopping with Agonia Records visit:

Scarecrow make their Horror Pain Gore Death Productions debut with the energetic album Flesheaters III.
This Halloween prepare for the ultimate in Horror Metal; a very interesting and intense combination of Death/Thrash with a healthy dose of Black Metal and Punk elements. Scarecrow are a force to be reckoned with a fresh sound that is rough, heavy, fast, raw and melodic. Fleasheaters III is complete horror, terror and destruction!
Special Edition CD includes 4 bonus tracks recorded live at Selviytyjät fest in Jalasjärvi, Finland 2012. A must have release for fans of Bludwulf, Danzig, Disfear, Driller Killer, Entombed, Genocide Superstars, GG Allin, The Lurking Corpses, Marduk, The Misfits, Motörhead, Nasum, Offspring, The Ramones, Samhain, White Zombie and Zeke.

Pre-order your copy of the CD for only $10 with free shipping at http://www.horrorpaingoredeath.com/store/hpgd072.html
Pre-order the Digital Download for only $6.66 at http://hpgd.bandcamp.com/album/flesheaters-iii-special-edition

Ereb Altor have announced that they will be releasing their latest album, “Fire Meets Ice,” in North America on October 15th on Metal Blade Records. The album was previously released via Cyclone Empire on July 26th throughout Europe. The Swedish trio, known for their melodic Viking metal mixed with elements of Bathory, Candlemass, etc; have previously released three full-length albums – “By Honour” in 2008, “The End” in 2010, and “Gastrike” in 2012. With “Fire Meets Ice,” it remains evident that Ereb Altor’s strength lies with their ability to meld black metal with the melodic tendencies with which fans would most associate the “viking” metal label. Fans can hear for themselves with the lyric video for “Nifleheim” at metalblade.com/erebaltor.

About “Fire Meets Ice“:
In 2012, it was time for a change of direction and pace. Viking Black Metal in the vein of early Bathory. Ragnar and Mats turn to a more aggressive musical direction when composing for Ereb Altor. On the album “Gastrike”, the Swedes present the listeners with a matured sound, but at the same time with a higher level of brutality and aggressiveness than on the highly acclaimed predecessor “The End”. Therefore, Ereb Altor’s sound also became closely tied to the legendary early works of Bathory. The epic hymns were enriched with a good portion of black metal elements, comprising of furious blast beats, thundering double-bass and aggressive vocal parts. “Gastrike” was a concept album and told tales, myths and ghost stories quite dark and the change of sound was necessary to reflect the lyrics in the right way.

However, the Swedes have not forgotten their traditional elements. Hypnotic melodies and sweeping parts will be present again on the new Opus “Fire Meets Ice” that will see the light of day the summer of 2013. On this new album which will be unleashed by Cyclone Empire in Europe and Metal Blade Records in North America Ereb Altor will summon the Norse Gods again and take the best parts from each sound of Ereb Altor’s history to create a varied masterpiece.

The album, recorded at Mortsella Studio, Sweden, drops on May 28 in Europe and June 11 in North America on Agonia Records. Tracks from Black Testament currently featured on The Welding Room radio program.

Band founder and mastermind, Ornias, describes Black Testament as a “sinister mix between Destruction Of Man (2003) and Timeless Reign (2007) releases.”

“it’s a journey through my spiritual darkness and death.”

A short series of video clips* documenting the recording process (vocals, guitars and drums) can be viewed at the links below:

Black Testament consists of 7 original tracks + intro; it will be available on CD, LP and digital. First 100 LP copies available on a coloured vinyl.

1. Revelation in the Waters

2. Venom of the Underworld

5. Eyes of the Earth

Click here to listen to the previously unveiled track, Demoness With Seven Names.

For more info and shopping with Agonia Records visit: www.agoniarecords.com

“This album is a dedication to the flaming giant-wolf, son of Loki; created from the Chaos-fires of Múspellsheimr. It is a tribute to the wrathful giant-wolf, son of Angrboða, found in the Ironwood where he is breeding hordes of giant monstrous wolves with Angrboða. His victorious name is Fenrir, also called Tungls Tjúgari! Hail Fenrir!”

“The sounds and music on this album are my auditory vision of the march of Fenrir convoyed with his hordes of giant wolves from the depths of the underworld to face Ragna Rök with warlike glory – deformed giant-wolves swarming in thousands. This is my tribute to the wrathful, harsh and untamed anti-nature of Fenrir’s mighty essence! The anti-cosmic enemy of the worlds! Heill Tungls Tjúgari! Heilir Fenris Synir!”

The cover art and full tracklisting for Fenris Kindir is as follows:

French black metal innovators SETH released the first new track from their forthcoming album, The Howling Spirit. A lyric video for the song Scars Born From Bleeding Stars is streaming now via SMN News. The Howling Spirit is slated for a North American release date on June 11.

Regarding the new incarnation of the band, band leader Heimoth issued the following statement:

“This is some exceptional moment for us as we are now officially back on the very same label that released our first album in ’98 and I guess this truly makes our recent comeback even more worthwhile. Both parts have taken different directions for more than 10 years but we are thrilled to unveil The Howling Spirit together. I personally feel this is a significant step forward born from the special relationship the band and SOM have had through the years.”

Swedish black metal band SVARTSYN has revealed the first track off the upcoming full-length album entitled Black Testament. The album is coming to shops on May 28 in Europe and June 11 in North America on Agonia Records.

The song Demoness With Seven Names can be streamed here: http://youtu.be/RDQlVdexn8Q

Black Testament can be described as a “sinister mix between Destruction Of Man (2003) and Timeless Reign (2007) releases.” – Ornias, the SVARTSYN founder and mastermind, added: “it’s a journey through my spiritual darkness and death.”

The album was recorded at Mortsella Studio, Sweden. A short series of video clips* documenting the recording process (vocals, guitars and drums) can be viewed at the links below:

Black Testament will consist of 7 original tracks and will be available on CD, LP and digital. First 100 LP copies available on a coloured vinyl.

Tracklist:
1. Revelation in the waters
2. Venom of the underworld
3. Demoness with seven names
4. Carving a temple
5. Eyes of the earth
6. Rising beast
7. Black testament

Retail pre-orders for Black Testament for are being taken now at: https://www.agoniarecords.com/index.php?pos=shop&lang=en

END_OF_DOCUMENT_TOKEN_TO_BE_REPLACED

French sowers of distinctive Black Metal, AOSOTH, premiered a video for Ritual Marks Of Penitence – the closing track off the new album entitled IV: Arrow In Heart. The video, directed by Matthieu Spinazzola and David Fitt, can be viewed at You Tube, below.

The AOSOTH track, Temple Of Knowledge made its debut on The Welding Room to open the March 18 (episode 105) just prior to the program jumping into a four-hour, Tuesday drive time slot on WRDR-DB. To hear any song from IV: Arrow In Heart on The Welding Room, send your Death Threats/Complaints to TheWeldingRoom@gmail.com.

First revealed song off IV: Arrow In Heart, can be streamed here: http://youtu.be/WFTvx9ZPpJc

AOSOTH will be also re-releasing their albums, II and III – both for the first time on black vinyl – along with the 4th album in their career on April 16 worldwide via Agonia Records.

“IV: Arrow In Heart is a natural improvement over bands previews release, entitled III, which already was ‘a major step forward for Aosoth in creating their own distinct sound” – Sputnik Music

The new release holds yet a bigger spiritual meaning, the band comments: “We’ve spent such a huge amount of time on defining a darker identity, yet open to a wider range of influences. Those tracks still haunt us, as delivering them was a painful and excruciating experience, and left some of us even physically wounded… Which gives that album even more of a spiritual value, as it involved a form of sacrifice.”

Furthermore, AOSOTH members add: “This fourth full-length release is without a doubt a great step forward for us in term of music writing, and sound.”