Alli Sports, a division of the NBC Sports Group, today announced the dates and locations for the 2014 Dew Tour Beach Championships.  Celebrating its ten-year anniversary, the Dew Tour will kick off in Ocean City, Md. for the fourth consecutive year, June 25-29, featuring skateboard and BMX events over the five-day event. The NBC Sports Group will feature more than eight hours of coverage of the Dew Tour Beach Championships, including four hours LIVE on NBC.

“The continued support of the city for the past three years sets us up for an exciting return to Ocean City during our 10th Anniversary season,” said Eric Grilly, President, Alli Sports.

“Working with the Mayor’s office, city council and all of the city departments, we have seen record attendance year after year, and enjoy creating an event that is influenced both by the physical environment of the beach and the action sports culture in the area.”

The Dew Tour kicks off June 25-29, drawing inspiration from the East Coast beach destination, featuring five days of thrilling competitions, lifestyle events and the interactive Dew Tour Experience with athlete meet and greets, prizes and games. The remainder of the 2014 Dew Tour schedule will be released in the coming weeks. 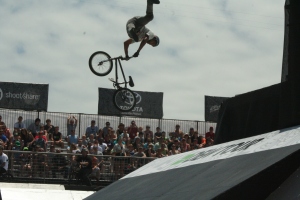 “We are thrilled to once again play host to the Dew Tour and welcome the amazing athletes to our beach,” said Rick Meehan, Mayor of Ocean City.

“Each year this event gets better and better and we are looking forward to a fantastic 2014 Dew Tour in Ocean City.”

DEW TOUR ON NBC SPORTS LIVE EXTRA: NBC Sports Live Extra— NBC Sports Group’s live streaming product for desktops, mobile devices, and tablets — will provide live comprehensive streaming coverage of the Dew Tour via “TV Everywhere,” the media industry’s effort to make quality content available to authenticated customers both in and out of the home and on multiple platforms.

Coverage will live stream to PCs, mobile devices and tablets through NBC Sports Live Extra, and to the digital platforms of participating cable, satellite, and telco services, via “TV Everywhere,” which is available on an authenticated basis to subscribers of participating MVPDs.

click here to view the first of the Dew Tour 2013 pictures.