Dark, brooding, pure, eclectic, Pathway features Garett Gazay fluctuating between monstrous growls and clean, soothing vocal cascades, all the while complimenting the twisted compositions of guitarists Andrew Green and Clayton Bartholomew. Bassist Ryan Healy and drummer Lance Lea round out the lineup, their rhythms and distinctive voices adding further depth to the collective’s meticulous, blackened soundscrapes. Sonically, SECRETS OF THE SKY aimed for a massive, clean, and organic sounding production. Much time was invested in obtaining huge drum sounds and the focus was on single performance takes throughout the process. The result is an ambitious foray into conceptual storytelling, coupled with emotional music full of peaks and valleys. This is a metal record, to be sure, but more importantly, it sounds like an album of music. This is not a random sequencing of songs or a search for a “hit” single; the tracks all have their place in the story, and the cuts in between actually drive the narrative through sound effects and ambiance. SECRETS OF THE SKY‘s Pathway is an experience to be had, as well as a record to merely be heard.

Pathway is available for pre-order now at metalblade.com/secretsofthesky 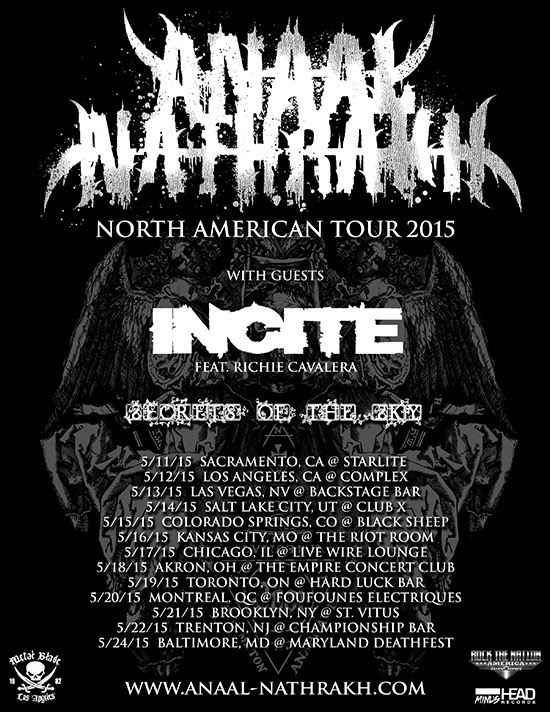 UK-based extreme metal duo, ANAAL NATHRAKH who have been a staple on #TWRradio since their 2012 release Vanitas, will wage war on North America later this spring on a long-anticipated stretch of live incursions. Slated to embark on May 11 in Sacramento, the antagonistic twosome will march through a dozen metropolises, with their final massacre to take place at this year’s Maryland Death Fest on May 24. The band will be joined by special guests Incite and label mates, Secrets Of The Sky.

Desideratum is currently available via Metal Blade Records at metalblade.com/anaalnathrakh.