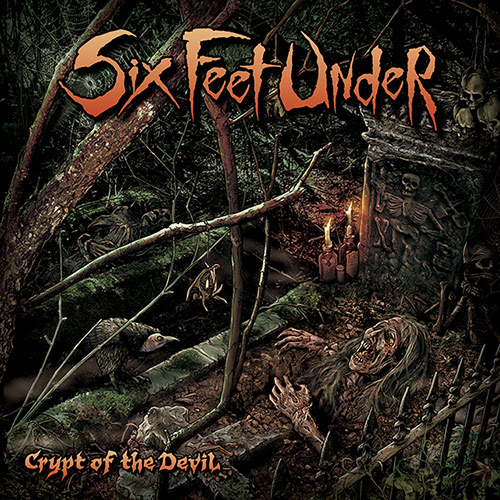 Drummer Gabe Seeber of Sacramento‘s fast rising death metal juggernaut, The Kennedy Veil, will be filling in for tech death heavy hitters, Decrepit Birth for their entire Hell In July tour run with Six Feet Under and Cannabis Corpse. With The Kennedy Veil being midway through recording their debut full length and only bass and vocal tracking remaining, Gabe had the time and availability to hit the road while the rest of the band returns to the studio to wrap up the recording process for Trinity of Falsehood.

“We are pleased to announce that drummer Gabe Seeber (THE KENNEDY VEIL) will be filling in for us during our upcoming tour and and headline festival this July! Due to having such a short amount of time to learn our material, our set at the Homeless One festival will be a bit shorter than expected, but we still promise give you all our absolute best!!! A HUGE thank you to Gabe for busting his ass to keep us going with such short notice!!!”

Recording sessions for Trinity of Falsehood officially got underway in June with Gabe traveling out to NB Recording in Santa Rosa, CA to lay down drum tracks with producer/engineer Nick Botelho. Multi-camera video footage was captured, and studio video updates will eventually make their way online, once the band wraps up recording sessions later this month. The rough mix of the song Disciples of Dead Aeons, which is being re-recorded for the album, can be heard here.

Trinity of Falsehood is tentatively set to see a release in late 2013 via Unique Leader Records.

SIX FEET UNDER parted ways with drummer Kevin Talley. However, the transition for the new drummer will be near-seemless, as he is a former band member of bassist Jeff Hughell. Marco Pitruzzella has officially joined the ranks of SIX FEET UNDER and will make his debut appearance with the band this Saturday in Memphis, TN at Scion Rock Fest! For info on the fest, including the full line-up, visit scionav.com.

“I’m proud to announce a new addition to the ranks of Six Feet Under. Replacing drummer Kevin Talley is our new friend and cohort, Marco Pitruzzella (http://youtu.be/KVs_HBoxZds). Marco has worked with Jeff Hughell in their former band, Brain Drill, and is such an amazing talented and great guy. I’m very excited having him in the band and can’t wait to take the stage with Marco this Saturday in Memphis for Scion Rock Fest!”

“It was good working with Kevin Talley for the past couple of years, but we are very ready and extremely focused on moving the band forward with a new, more stable and permanent lineup for writing as well as touring. Be prepared to be shredded! See you all soon!”

Six Feet Under and Brain Drill are featured artists on The Welding Room. Call (856) 393-2100, e-mail TheWeldingRoom@gmail.com or join the rockdefradio.com chat room to send your death threats/complaints.

Death metal behemoths SIX FEET UNDER are back, and with the seething Unborn, the tenth full-length of their imposing career, they are out for blood. Led by the inimitable Chris Barnes, owner of one of the most powerful and instantly recognizable voices in the genre, the band are returning with an overhauled line up that sees them reinvigorated and churning out some of the most visceral music they have ever put their name to.

Click here to hear the third single from Unborn, Neuro Osmosis. You can hear Prophecy on The Welding Room or request ANY song from the new album.

In November of 2010 when vocalist and founding member Chris Barnes first started to get the idea of working with new writers for SIX FEET UNDER’s next release, he contacted Rob Arnold, Jari Laine, and Ben Savage to share in the writing process. After just two years of writing and recording 20 plus tracks, and releasing Undead in May of 2012, SIX FEET UNDER are now proud to unveil Undead’s demented fraternal twin…

Undead proved to be one of SIX FEET UNDER’s most critically acclaimed albums to date, and with a revamped and tour-hardened lineup rounded out by: guitarist Ola Englund, drummer Kevin Talley, bassist Jeff Hughell, and long-time guitarist Steve Swanson, Unborn promises to elevate the band to even loftier heights.

The lyric video for Zombie Blood Curse, the first track to be loosed from Unborn, is streaming now at metalblade.com/sixfeetunder. While there, fans can also pre-order the album.

No one likes to read.

The picture pages are up & ready for your consumption.

RevolverMag.com the online home of Revolver Magazine is hosting an exclusive premiere of a new track from the upcoming DYING FETUS album Reign Supreme. Head over to http://www.revolvermag.com/news/dying-fetus-premiere-new-song-second-skin.html and check out the song Second Skin.

Reign Supreme will be released June 19th on Relapse Records and is available for pre-order HERE.

Reign Supreme features nine tracks and is a “return to roots” with production focused slightly more on slam than in the band’s last few works.  Thematically, the album is set to be a good old-fashioned piece of social and political commentary in the style of DYING FETUS as we have come to know.

Check out an exclusive lyric video for the first new song from Reign Supreme entitled “Subjected to a Beating” HERE.

DYING FETUS will be on tour all summer long including an appearance at Maryland Death Fest as well as the “18 Nights of Blood Tour” in North America with label matesREVOCATION and Six Feet Under. They will also be on a headlining tour of Europe which includes appearances at the “Copenhell Festival” in Copenhagen, Denmark, “Hell Fest” in Clisson, France, the “With Full Force” festival in Roitzschjora, Germany, “Sevilla Rock Festival” in Sevilla, Spain and the “Getaway Rock Fest” in Gävle, Sweden.

For updates on DYING FETUS visit their Facebook and MySpace pages.

DYING FETUS on Tour With REVOCATION and Six Feet Under

DYING FETUS on Tour With REVOCATION and Six Feet Under